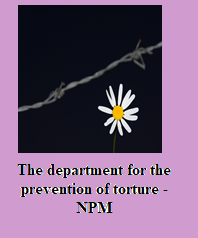 THE DEPARTMENT FOR THE PREVENTION OF TORTURE

AND OTHER CRUEL, INHUMAN OR DEGRADING

TREATMENT OR PUNISHMENT OR IN PLACES OF DETENTION

By ratifying the Optional Protocol to the Convention against Torture (OPCAT), adopted by the United Nations General Assembly on 18 December 2002, Romania undertook to set up a body to visit places of detention, in order to prevent torture and other cruel, inhuman or degrading treatment or punishment in places of detention.

Starting with 2014, within the People’s Advocate institution functions the National Preventive Mechanism (NPM).

What is the mission of the NPM?

NPM regularly monitors the treatment of persons in detention, with the aim of:

What does a place of detention and deprivation of liberty mean?

Place of detention means any place where persons are or may be deprived of their liberty, either on the basis of an order of a public authority or at its request or with its tacit consent.

Deprivation of liberty means any form of detention or imprisonment or the placement of a person in a public or private place which they cannot leave at will, by order of any judicial, administrative or other authority, including by decisions of private legal entities that administer social services.

What are the places considered as places of detention?

The People’s Advocate Institution exercises its duties regarding the prevention of torture and other cruel, inhuman or degrading treatment in:

Regarding the area of competence of the NPM:

OPCAT requires that the NPM have access to any other place where someone may be kept against their will in connection, even indirectly, with public authority.

The UN Subcommittee on Prevention of Torture (SPT) states that any place where a person is or may be deprived of their liberty should be covered by the OPCAT mandate if there is a situation in which the State exercises, or could exercise, a regulatory function.

How does NPM work?

How are NPM visits conducted?

What is the composition of the visiting team?

The visiting team is multidisciplinary and consists of: legal experts, doctors, psychologists, social workers and representatives of non-governmental organizations.

What happens after the visit?